My daughter Pamela Froman’s flattering post on her blog! 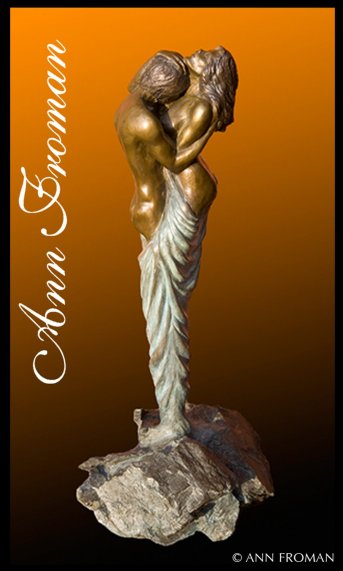 The piece is called “The Lovers” and you can really feel the emotion!

I get asked a lot where I have gotten inspiration and about my background etc. Well one of the most important ingredients in my love for art, is my Mother, Ann Froman. She is a famous talented sculptor who has had an amazing career. Her work is in Museums and Galleries all over the world. She has a diverse collections of sculpture, from, the Bennington Museum commisioned dancing bronzes, to Woman of the Bible, to Fashion Figures, she has a fabulous acrylic collection, to Holocaust pieces. In fact, one of her Holocaust pieces, called “Survival” that stands 9 feet tall and is in an edition of 9, is at Harvard University and also in front of Brooklyn College. But she also has a sense of humor with her collection called “Nude York” (typical New York people are naked except for accessories). Some of my favorite are from her emotional pieces, like “The Lovers” above, she gave it to me for my anniversary, and it just is so sensual. My mother actually started as a shoe designer, and was one of the top designers in her field, infact there was an article written in Footwear News below just a few years ago.

Create a link to this page

Copy and paste this link tag into your Web page or blog:

WHERE ARE THEY NOW? FOUR OF THE INDUSTRY’S MOST WELL-KNOWN DESIGNERS HAVE MADE EVEN BIGGER NAMES FOR THEMSELVES IN THE FOOTWEAR AFTERLIFE.

WHERE ARE THEY NOW? FOUR OF THE INDUSTRY’S MOST

WELL-KNOWN DESIGNERS HAVE MADE EVEN BIGGER NAMES FOR

THEMSELVES IN THE FOOTWEAR AFTERLIFE.

They were some of the biggest names in the business.Before Sigerson Morrison, Kate Spade and Tamara Mellon created their own fashion empires, Ann Froman, Joan Helpern, Florence Otway and Bonnie Smith were the It-Designers of the shoe industry. For many decades, each of these women played a key role in defining the direction of footwear design.

Today, all four have left the shoe world to pursue new careers light years away from the world of lasts, sketches, boutiques and pumps. But each of these powerful talents has left a lasting impression on the business they loved, and as a group, they are often credited with paving the way for a whole new crop of female designers.

Ann Froman, 60, was one of Nina Footwear’s top designers in the 1960s and 1970s and broke new ground by designing the first fashion-driven down boot and rubber-bottomed pump. Today, she is an acclaimed sculptor whose work has been on exhibit at the Metropolitan Museum of Art and Brooklyn College.

While these former footwear designers are now traveling down extremely different paths, they share a common goal: to lend their considerable talents to a host of new careers. Here, Footwear News catches up with Froman, Helpern, Otway and Smith, and looks at the post-footwear lives of the prestigious group of women.

Now a world-renowned artist whose sculptures have been displayed at New York’s Metropolitan Museum of Art, Brooklyn College, the Holocaust Museum in Washington, D.C. and Caesar’s Palace in Las Vegas, Ann Froman still has a shoe fetish.

“For the last 36 years, I’ve lived off my sculpture,” she said. “But if I go to a new city, I still walk into a shoe store before I go into an art gallery.”

Froman’s passion for design — both apparel and shoes — began as a child. She attended the High School of Art and Design in New York, and then the Fashion Institute of Technology. After that, she moved to Paris to study painting and architecture under the legendary Le Corbusier at the Palace de Fontainbleu School of Fine Art. “I showed him my designs, and he felt I should switch my major from painting to sculpture,” recalled Froman.

But she returned to New York and landed her first job in 1960, designing clothing for Abe Schrader. After a couple other apparel-design stints, she decided she wanted to design shoes. “I always had a shoe fetish,” Froman recalled. “I used to draw them all the time.” So she began flipping through the classified section of Footwear News and came upon a position for a freelance shoe designer at St. Louis-based International Shoe Company. She sent in a few of her sketches.

The company liked what they saw, and before she knew it, she was again drawing shoes — this time, for pay.

In 1964, she moved on to the famed Fleming-Joffe, a company known for its high-fashion leather goods and exotic skins; Charles Jourdan, Bruno Magli, Nina Footwear and Ferragamo were only a few of the companies that purchased their materials from Fleming-Joffe.

During this time, Nina Footwear’s Mike and Stanley Silverstein “begged” Froman to leave Fleming-Joffe to become their company’s full-time designer. “They really wanted me,” she recalled. “One time, they even offered me a Rolls-Royce if I came and worked for them.”

So two years later (and with no Rolls-Royce), Froman accepted a position at Nina, where, she said, Stanley Silverstein taught her how to run an entire shoe through the factory, from last to heel. “She was greatly talented, had great ideas, and she had a handle on what design was all about,” said Silverstein.

A few years later, Froman went out on her own, designing for Caressa, Polozio, Gambet Shoe Company and Belgrade Shoe Company. Over the next 10 years, the designer made a lasting mark on the industry: She designed the first-ever pair of fashionable down boots for women. She created Lucite-heeled shoes, boots with white Christmas lights running down their backs, shoes that fold up, and alligator boots on 4-inch platform heels for Sammy Davis, Jr. (He wore them for the first time on “The Tonight Show” starring Johnny Carson.) “I was one of the first to make `monster shoes’ on big wide lasts.

I was also the first to put rubber shoes on soles,” said Froman. “Everyone laughed then, but they shouldn’t have. As far as I’m concerned, I don’t think people knew how to make comfortable shoes.”

While she was busy creating cutting-edge footwear for a slew of well-known companies, Froman never put her sculpting aside. “One time I went to her home to interview her,” recalled Vivian Infantino, Footwear News’ fashion editor at large. “We were in the kitchen and she was making cereal for her baby and I remember that there were little figurines of clay everywhere. She was always sculpting.”

In the early ’70s, at a time when Froman’s career was at its height, she decided to quit footwear design and pursue her sculpting full-time. “Everyone thought I was nuts,” she recalled. “But I had started to collect art and I was so thrilled with sculpture.”

She enrolled in a sculpture course at the New School in New York and on her first day of class, her instructors told her to leave because, “They said I was a natural talent and they had nothing to teach me,” Froman said. But she continued the course, and six months later she had her first one-woman show. It sold out.

Today, Froman said her medium of choice is bronze and that her artistic influences range from the Bible to relationships to politics to world events. Her Women of the Bible collection (1977) consists of 21 bronzes depicting religious characters, such as Jezebel and a pregnant Eve without a belly button; Froman’s Holocaust Collection (1980) includes her most famous piece, “Survival” — a two-tiered sculpture depicting a huddled mass of people gazing reflectively into the sky. Versions of the sculpture are now on display all over the country, some at the entrances of Brooklyn and Radcliffe Colleges.

“She puts life into a piece of metal,” said Silverstein, who today is an avid collector of Froman’s sculpture. “You look at it and you can see their smile and what is behind them. I’ve seen very few people do it like that. She’s unique in that way.”

But in 1999, Froman’s career took a drastic turn. She fell down a flight of stairs, and shortly thereafter lost her sight. She was completely blind for two and half years. “I couldn’t see or sculpt, but really wanted to do something,” Froman said. “But I was depressed, so a dear friend of mine took me to [Upstate New York to relax for a while].” There, Froman had the vision to open her own gallery. So in June 2001, with the help of her husband, family and friends, the Ann Froman Gallery opened in Rhinebeck, N.Y. The 1,500-sq.-ft. space is now home to much of her work, while it also hosts shows for other renowned artists.

After several rehabilitating operations, Froman regained her sight in January 2003. “My friends tell me God gave me back my sight so I could sculpt again,” she said. Today, 60-year-old Froman is sculpting her first piece since she regained her sight. She said the subject matter is “top secret” and that if she divulged any further information she could be disqualified from the event.

She now frequently negotiates with museums and galleries, planning one-woman exhibitions and showings of her sculpture. In fact, later this summer, the National Museum of Dance in Saratoga Springs, N.Y., will host an exhibition of her work. “The work I do today reflects my background,” Froman said. “My fashion design, art and architecture has all culminated together into my sculpture.”

I have a Blog!

Thank you so much for visiting!  I’m excited to be in control of my online presence, check back often as I fill you in on the exciting things going on in my career and life.